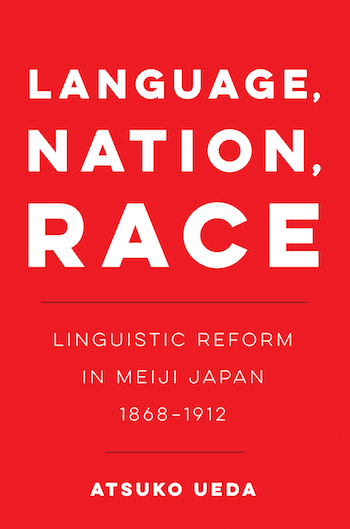 Language, Nation, Race explores the various language reforms at the onset of Japanese modernity, a time when a “national language” (kokugo) was produced to standardize Japanese. Faced with the threat of Western colonialism, Meiji intellectuals proposed various reforms to standardize the Japanese language in order to quickly educate the illiterate masses. This book liberates these language reforms from the predetermined category of the “nation,” for such a notion had yet to exist as a clear telos to which the reforms aspired. Atsuko Ueda draws on, while critically intervening in, the vast scholarship of language reform that engaged with numerous works of postcolonial and cultural studies. She examines the first two decades of the Meiji period, with specific focus on the issue of race, contending that no analysis of imperialism or nationalism is possible without it.

“Language, Nation, Race is an exceptional book. It not only provides a cogent interpretation of Meiji-era linguistic and literary reform movements but also productively challenges the current scholarly consensus regarding the meaning of these movements. Atsuko Ueda makes an entirely original and convincing argument about the relevance of ‘whiteness’ to the understanding of linguistic, aesthetic, and cultural values within these movements.”—JAMES REICHERT, Associate Professor of East Asian Languages and Cultures, Stanford University

“A remarkable accomplishment, bound to have a lasting impact in the field of Japan studies and beyond. Ueda’s compelling reading of Meiji period literary and linguistic debates opens new avenues for a philosophical questioning of phoneticism and its significance to the formation of the geopolitical categories of ‘West’ and ‘non- West.’”—PEDRO ERBER, author of Breaching the Frame: The Rise of Contemporary Art in Brazil and Japan

ATSUKO UEDA is Associate Professor of Modern Japanese Literature at Princeton University. She is author of Concealment of Politics, Politics of Concealment: The Production of “Literature” in Meiji Japan and coeditor of The Politics and Literature Debate in Postwar Japanese Criticism, 1945–1952.

This is an Open Access book distributed under the terms of the Creative Commons Attribution 4.0 license (unless stated otherwise), which permits unrestricted use, distribution and reproduction in any medium, provided the original work is properly cited. Copyright is retained by the author(s).