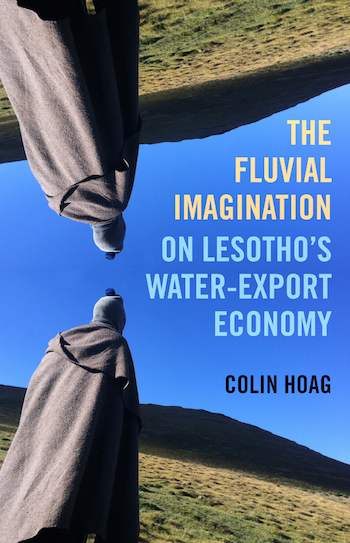 Landlocked and surrounded by South Africa on all sides, the mountain kingdom of Lesotho became the world’s first “water-exporting country” when it signed a 1986 treaty with its powerful neighbor. An elaborate network of dams and tunnels now carries water to Johannesburg, the subcontinent’s water-stressed economic epicenter. Hopes that proceeds from water sales could improve Lesotho’s fortunes, however, have clashed with fears that soil erosion from overgrazing livestock could fill its reservoirs with sediment. In this wide-ranging and deeply researched book, Colin Hoag shows how producing water commodities incites a fluvial imagination: a sense for how water flows. As we enter our planet’s water-export era, Lesotho exposes the possibilities and perils ahead.

“Colin Hoag’s keen ethnographic eye shows how the Basotho’s beloved pula (rain) was transformed into exportable and commodified ‘water,’ demonstrating how dams are entangled with a host of thorny social and political issues.” — James Ferguson, author of Give a Man a Fish: Reflections on the New Politics of Distribution

“A rich account of the ecological, political, and economic contradictions produced through Lesotho’s water-export economy. The work is engaging and well-written, based on long-term fieldwork in Lesotho’s grazing communities, where lives and livelihoods are bound by the state’s management of water.” — Laura A. Ogden, author of Swamplife: People, Gators, and Mangroves Entangled in the Everglades

“A beautifully written and thoroughly interdisciplinary book that shows why and how it is necessary to engage histories of racialization and commoditization in scientific practice, on the one hand, and natural scientific practices in the social sciences, on the other. In describing the ongoing histories and infrastructures that make water and empire durable forces, Hoag’s work is a wonderful and timely contribution.” — Nikhil Anand, author of Hydraulic City: Water and the Infrastructures of Citizenship in Mumbai

COLIN HOAG is Assistant Professor of Anthropology at Smith College.