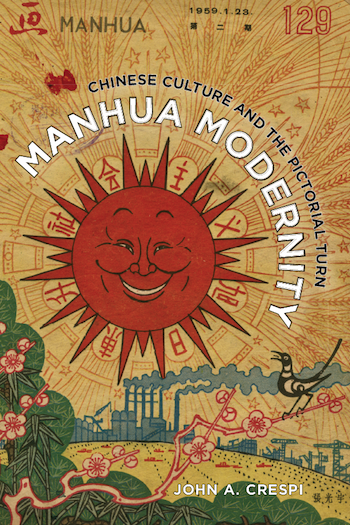 Chinese Culture and the Pictorial Turn

From fashion sketches of Shanghai dandies in the 1920s, to phantasmagoric imagery of war in the 1930s and 1940s, to panoramic pictures of anti-American propaganda rallies in the 1950s, the cartoon-style art known as manhua helped define China’s modern experience. Manhua Modernity offers a richly illustrated and deeply contextualized analysis of these illustrations from the lively pages of popular pictorial magazines that entertained, informed, and mobilized a nation through a half century of political and cultural transformation.

“An innovative reconceptualization of manhua. John Crespi’s meticulous study shows the many benefits of interpreting Chinese comics and other illustrations not simply as image genres but rather as part of a larger print culture institution. A must-read for anyone interested in modern Chinese visual culture.” CHRISTOPHER REA, author of The Age of Irreverence: A New History of Laughter in China

“A rich media-centered reading of Chinese comics from the mid-1920s through the 1950s, Manhua Modernity shifts the emphasis away from ideological interpretation and demonstrates that the pictorial turn requires examinations of manhua in its heterogenous, expansive, spontaneous, and interactive ways of engaging its audience’s varied experiences of fast-changing everyday life.” YINGJIN ZHANG, author of Cinema, Space, and Polylocality in a Globalizing China

JOHN A. CRESPI is Associate Professor of Chinese and Asian Studies in the Department of East Asian Languages and Literatures at Colgate University. He is the author of Voices in Revolution: Poetry and the AuditoryImagination in Modern China