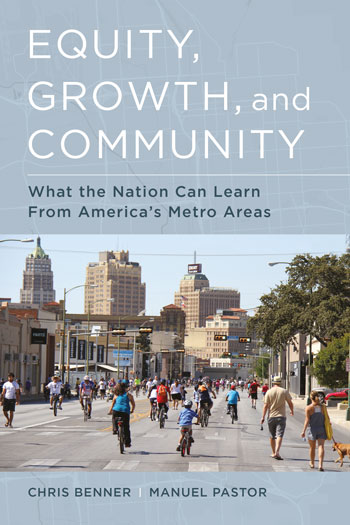 Struggle and the City: Conflict-Informed Collaboration

Affiliation: University of Southern California, US

Chapter from the book: Pastor M. & Benner C. 2015. Equity, Growth, and Community: What the Nation Can Learn from America's Metro Areas.

While all of the case studies explore the role of conflict, conflict is the central theme of chapter 6. In Greensboro, widely divergent visions of the region, primarily between black and white constituencies, have conspired to limit the evolution of a diverse epistemic community; participants are divided by their very sense of the region. In Fresno, both structural factors and a history of conflict has led to both poor outcomes and fragmented politics, which maintains conflict. In San Antonio, in contrast, a sharp set of challenges to traditional centers of power by a highly mobilized set of minority constituents gave way, over time, to more collaborative approaches on both sides, showing that sometimes conflict can lead to collaboration.